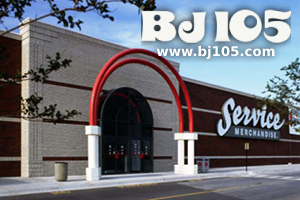 Service Merchandise was a retailer chain of catalog showrooms carrying fine jewelry, toys, sporting goods, and electronics that existed for 68 years (from 1934 to 2002).

History
Service Merchandise’s history can be traced back to 1934, to a small five-and-dime store founded by Harry and Mary Zimmerman in the town of Pulaski, Tennessee. After leaving the wholesale business, they would open Service Merchandise, Inc., the first of what evolved into a chain of catalog showrooms opened in 1960 at 309 Broadway in downtown Nashville, Tennessee.[1]

Older logo mainly used in the 1970s–1985
During the 1970s and 1980s, Service Merchandise was a leading catalog-showroom retailer. At its peak, the company achieved more than $4 billion in annual sales. As the company expanded, it began to open showrooms nationwide, mostly in the vicinity of major shopping malls, which were in vogue in the 1970s. In the early 1980s, the Service Merchandise headquarters moved from Nashville to nearby Brentwood, Tennessee, becoming one of the first businesses to plant itself in the area that is now known as Cool Springs. In May 1985, Service Merchandise acquired the H. J. Wilson Co. for approximately $200 million. Raymond Zimmerman, the CEO, was attracted to Wilson’s stores to gain a stronger foothold in the Sunbelt states.[2][3] Several of these Wilson’s locations included an off-priced apparel department of about 15,000 square feet (1,400 m2). Service Merchandise also had other wholly owned subsidiaries featuring retail stores such as Zim’s Jewelers, HomeOwners Warehouse (later called Mr. HOW Warehouse),[4] The Lingerie Store, and The Toy Store.

Service Merchandise was a prominent sponsor of Wheel of Fortune. The retailer also provided some of the prizes on The Price Is Right, Shop ’til You Drop on The Family Channel, and Shopping Spree.

Downfall
The company lost market share in its housewares and electronics sectors to giant discounters such as Walmart and Bed Bath & Beyond, and later Best Buy and Circuit City. Although Service Merchandise was early to embrace the Internet in the 1990s, generating tens of millions of dollars in sales, it was not enough to offset the damage done by the mega-chain stores springing up nationwide. Until its closure, however, Service Merchandise enjoyed a strong jewelry department, continuing as the largest watch retailer in the United States.[citation needed]

Gary M. Witkin was appointed to the new position of president and chief operating officer in 1994.[5][6][7]

The company responded to the market pressures with a series of restructuring plans that included the discontinuation of unprofitable product lines such as electronics, toys and sporting goods, and refocusing on fine jewelry, gifts, and home decor products. Many of their showrooms were also closed or downsized significantly.[8][9][10] During this time, the company was successful in sub-dividing a number of its company-owned stores into two or three units and sub-leasing the newly created spaces to other national chains thus reducing costs and at the same time, generating more mall and store traffic.

Final logo used from 1999 to 2002 before store closure
While in the process of changing its retail format, a group of creditors forced an involuntary petition for bankruptcy under Chapter 11 on March 15, 1999, seeking court supervision of the company’s restructuring.[11] The company later filed a voluntary Chapter 11 petition to improve relations with its vendors and creditors in an effort to stabilize its business.

Raymond Zimmerman, son of the original founders (who had been instrumental in the process of building the family business into a multibillion-dollar empire) resigned as chairman of the board in November 2000. The company subsequently attempted to pull itself out of bankruptcy once again in summer 2001, but the economic downturn following the September 11 attacks proved to be a hurdle the company could not clear.[12][13] With only 200 catalog showrooms left, the stock valued at less than one cent per share, and no profitability in sight, Service Merchandise ceased operations and shuttered all of its remaining stores by early 2002.