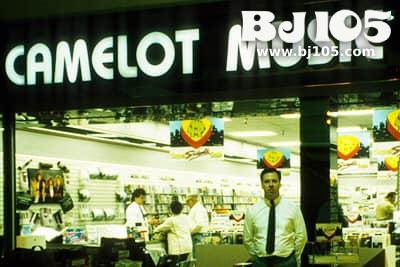 Camelot Music was a mall-based retailer of prerecorded music and accessories and was one of the largest music retailers in the United States based on store count.[citation needed]

As of May 31, 1998, the company operated 455 stores in 37 states nationwide under two brand names: Camelot Music and the Wall. Camelot Music was founded in 1956 in Massillon, Ohio, by Paul David and his brother Robert David. It operated 305 stores with a significant store base concentration in the Midwest and Southeast regions of the United States. The Wall operated 150 stores primarily in the Mid-Atlantic and Northeast regions of the United States.[citation needed]

The Wall was best known for its trademark “Lifetime Music Guarantee”, which offered free replacements for cassettes and CDs that had been damaged in any way.[5][6] They were also notable for allowing customers to listen to CDs before buying them, and for their “Repeat Performer” customer card program, where 20 card punches earned a free CD or cassette tape.[7]

In late 1998, Camelot was acquired by Trans World Entertainment,[8][9][10] which later consolidated all of its mall-based music stores under the brand name FYE, including the remaining Camelot and The Wall locations.