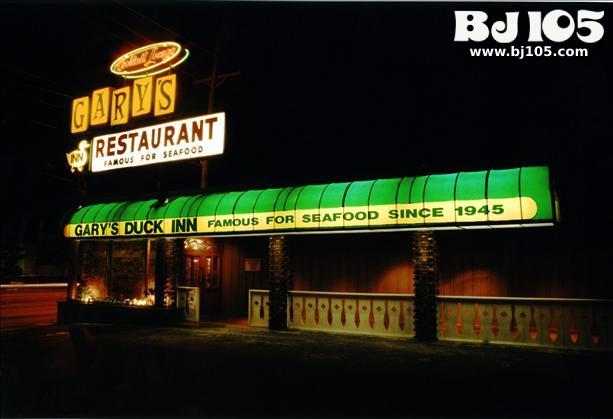 Gary’s Duck Inn, an Orlando landmark and the inspiration behind the Red Lobster seafood chain, closed last weekend. It was 49.

The popular seafood restaurant at 3974 S. Orange Blossom Trail had been up for sale in recent months. Its current owner, Bud Mills, was unable to spend the money needed to make the business a success, said Art Childress, a manager at the restaurant.

On Friday, with no buyer in sight, Mills told employees the restaurant would close that night for good.

“It’s been quite a shock,” said Childress, who has worked at the restaurant for 26 years. “It’s a shame.

It’s a business that has been an institution, a part of Central Florida for many years.”

Gary’s Duck Inn opened in 1945, and during the next two decades, its owner, the late Gary Starling, won a loyal following among Central Floridians who had few choices when they wanted to go out for dinner.

In 1963, Starling sold the business to a group of investors that included Bill Darden, the founder of Red Lobster, now the nation’s largest dinner-house chain.

Darden, a Georgia-born restaurateur, was impressed by the popularity of Gary’s Duck Inn, and he figured a similar, no-frills seafood concept could catch on nationwide. He opened the first Red Lobster in 1968 and sold the business two years later to General Mills Inc., whose restaurant division is based in Orlando. Darden died last spring.

Today, the legacy of Gary’s Duck Inn’s has grown to close to 700 restaurants in the U.S. and overseas.

In Orlando, the original is sure to be missed.

The restaurant closed after its last customers left at 10 p.m. Friday. The windows were boarded over, and on Monday ‘for sale’ signs were posted.

That left Childress and Rick Dorman, another manager who worked at Gary’s for more than two decades, to answer phone calls and write recommendations for employees.

In its first year, Gary’s Duck Inn was little more than a house drawing a mix of locals and tourists driving down U.S. Highway 441, called Orange Blossom Trail in Orlando.

With three employees, the restaurant served 2,000 pounds of shrimp during its first year. There was seating for 15.

The boom years came after Darden and his partners took over. From the mid-1970s to the mid-1980s, Gary’s Duck Inn had 90 employees and served about 25,000 pounds of shrimp annually.

After six remodeling jobs, the building grew to cover almost a quarter-acre of dining rooms, with seating for 400.

By the 1960s, newly built interstates had diverted tourist traffic. But the opening of Walt Disney World in 1971 gave the restaurant a new boost. With the economy starting to boom, Central Florida had few other restaurants of its caliber.

Security guards were hired to protect patrons and their cars, but business began to fall off rapidly about three years ago.

Reba Aulick, 85, who graduated from high school in Orlando 1929, has dined at the restaurant from the day it opened.

“It was always such a respectable place,” Aulick said. “They couldn’t help it if they were in an area that didn’t stay that way.”

Gary’s Duck Inn’s future turned shaky last year, when the remaining partners in the original investor group turned it over to Starling’s daughter Nancy Mills. She died this year, and her husband has since been trying to sell the restaurant.

“It was a situation where in order for Gary’s to continue to prosper, it was necessary to put a good deal of money into it,” Childress said. “It just was not available to them.”

The restaurant is still for sale, he said. But for now, it has joined a handful of other old-time Central Florida establishments – Freddie’s Steak House, Chris’s House of Beef and the Villa Nova among them – in the history books.