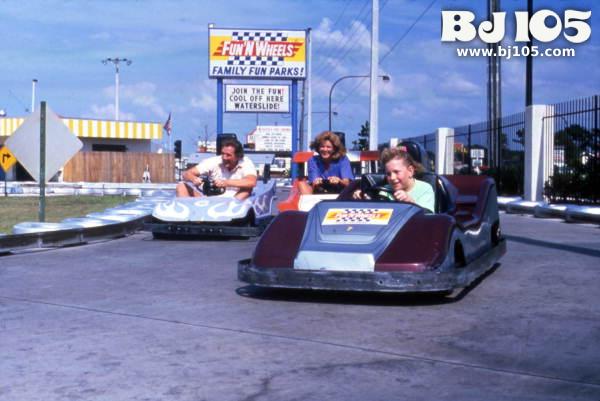 In 1979, Fun Spot America Founder John Arie, Sr opened Fun N Wheels – one of the first themed action parks with multiple tracks, family rides, and an open-air arcade. The concept was a hit with locals and tourists alike and the park became a staple in the community. Fun Spot America

There comes a time in every child’s life when video games become more important than crayons and coloring books, and a garish pair of knee-length “jams” may be counted among the finer things of life.

That’s the age when a place like Fun ‘N Wheels amusement park begins to look like the center of the universe.

Located at 6739 Sand Lake Road in Orlando, Fun ‘N Wheels is, according to a 6-year-old nephew of mine, the very definition of fun.

Park admission is free, although a doting adult could drop $20 in as many minutes without really trying.

There are many rides and games to indulge in, including an arcade, three go-kart tracks, a miniature golf course, bumper cars (both land and water varieties), Raging Riptide (a 40-foot-high water slide), an air-cushioned “moonwalk” and a newly erected, 55-foot ferris wheel.

Ride tickets cost $1 each, and for those chaperoning a group of children (or a single energetic one), a book of 20 ride tickets sells for $18.

The best ticket bargain this week is a wristband for $7.50 which allows riders unlimited use of the kiddie cars, moonwalk, water slide, ferris wheel and bumper cars, plus a pass that can be used for one ride on the go-karts or one miniature golf game.

Teen-agers and adults make up a good portion of Fun ‘N Wheels’ patrons, but since kids seem to have the most fun at amusement parks, here’s a list of activities recommended by a 6-year-old:

— Go-karts. Okay, so they only go about 15-20 mph, but a driver is free to “put the pedal to the metal” and lean into those turns. Licensed drivers will be reminded of Interstate 4. (Note: Children are allowed on the kiddie cars by themselves. Children must ride with adults on both the family track and the fast track. Additionally, children must be at least 48 inches tall to ride fast track go-karts.)

— Raging Riptide. Riders use a cushion to slip down this 40-foot water slide. It’s possible to remain relatively dry, even after a slide or two.

— Bumper boats. The pool looks small, but once inside there’s plenty of room to spin these motorized innertubes. Riders definitely get wet.

On heading back to the car with the day’s spoils — prizes that seem designed to make adults shudder — my nephew’s haul included a pair of dice covered with orange spots and lilac-colored fake fur; a 4-inch-square mirror with the Harley Davidson Co. logo printed across the front; a half of a bag of rapidly-crystalizing cotton candy; and a tiny plastic car that my nephew earmarked — chivalrously — “for my sister.”

Come to think of it, a few years ago I would have called that stuff pretty neat.