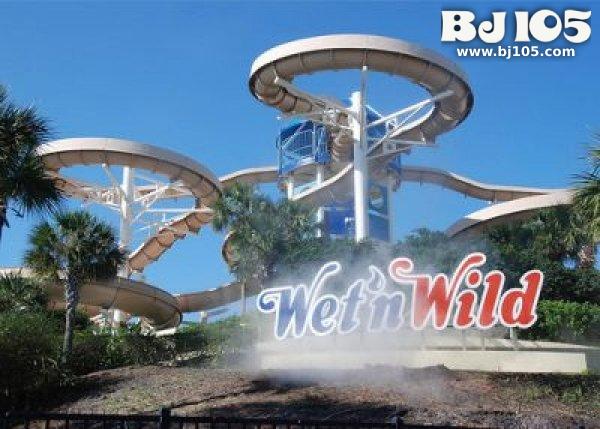 Wet ‘n Wild Orlando was the flagship water park of Wet ‘n Wild owned by NBC Universal, located on International Drive in Orlando, Florida. It was founded in 1977 by SeaWorld creator George Millay.[1] It closed on December 31, 2016.

History
Development and ownership
While developing SeaWorld, George Millay realized the need for a water park, later recalling “being in Florida, with all its heat and hot sun, you naturally think about cooling off in water”. In the mid-1970s, he directed his time and money towards the project. The idea stemmed from the splash pad at Ontario Place in Canada and the wave pool at Point Mallard Park in Alabama. His desire was to combine these two elements and build upon it in order to achieve a good return on investment. Due to his prior success with SeaWorld, he was able to form a team of investors to fund the project.[2]

The park opened in Orlando, Florida on March 13, 1977. Although it opened to rain and suffered a $600,000 loss in its first year of operation, Millay kept it open. He later claimed it “started making money the second year and never looked back”.[2] The success of the park spawned several other Wet ‘n Wild-branded parks across the Americas.[3][4]

In 1998, Millay sold off his interests in his parks. The Orlando location was purchased by Universal Studios Recreation Group, who continued to lease the land on which it is located.[5] In mid-2013, Universal purchased the 50 acres (20 ha) of land for $30.9 million.[6]

Brain Wash
In 1998, the Hydra Fighter was added to the park.[7] Riders were able to control their suspended gondola through the use of high-powered water guns.[8]

In 2000, the park renovated their Kids Park children’s area. The original aviation theme was converted into a sandcastle theme. The renovation saw three ProSlide Technology “Kidz” slides added as well as a castle with a tipping bucket which dumped 250 US gallons (950 l; 210 imp gal) of water every three-and-a-half minutes. With the exception of the three slides, it was manufactured entirely by Integrity Attractions.[9][10]

In 2011, the Kids Park was demolished. In 2012, it was replaced by Blastaway Beach, a larger children’s water play area, also themed around sandcastles.[17]

In 2014, the Bubba Tub was removed and replaced with the Aqua Drag Racer, a four-lane race slide.

Attendance
The park was the most-attended water park in the United States until 1999, when Walt Disney World Resort’s Typhoon Lagoon and Blizzard Beach surpassed it.[5][21] At the time, it was averaging around 1.3 million visitors for several years.[3][22]