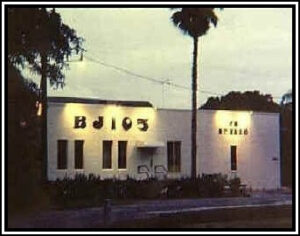 Welcome to the new BJ105! We launched this Radio Station to bring back the memories of one of the most legendary Top 40 radio brands in America. This iconic radio station was on air for 16 successful years before becoming an Adult Contemporary Top 40 station.

Our new Radio Station and website are both a tribute to a great time in Orlando history. This era was the beginning of Orlando’s massive growth and world-wide recognition as a top tourist destination.

We will feature updated blog posts from Defunct Orlando landmarks hoping to take you back in time to reminisce these great years in Orlando. We Thank You for listening and hope you help spread the word to your friends and family about the all new BJ105. If we see you online promoting our station we might just send you a classic retro BJ105 T-Shirt!

Listening to the new BJ105 will be similar to listening to the old except for DJ chatter. The station will focus on Hit Music songs from the 70’s, 80’s and 90’s. The “jingles” heard between the songs are the original jingles from the original station modernized by our Program Director while still holding that “retro” sound, in addition to the “Classic Retro Ads” to really take you back in time.

BJ105 was owned by Nationwide Communications and claimed to be Orlando’s “Number One Hit Music Station.” The logic behind playing the most popular singles was obvious, however the station was huge on big money contests as much as great music to appeal to the large fan base of listeners throughout Central Florida.

“It seemed like everyplace I visited in Orlando whether a store, Wet N’ Wild, gas station, I-Drive; everybody was playing BJ105”

BJ105 broadcasted numerous national syndicated shows and countdowns including Casey Kasem’s American Top 40 while dominating the Orlando airwaves taking the number one spot in the ratings year after year.

In 1989, BJ105 switched formats to Orlando’s new Mix 105.1 – Not too hard, not too light. The new station wanted to appeal to a more contemporary, older audience.